How to encapsulate two, three or maybe four years into two paragraphs? Most likely they will be long paragraphs for which I apologize. Hi this is John, I had planned on retiring from the School of Dentistry on my 70th birthday in September of 2012–but the plan was delayed when old man Myeloma raised his crazy head during the spring. With consultation from four prominent Myeloma specialists across the country we decided to do a second autologous transplant (even though the maintenance medications had put me back into remission) at the time that my body was the strongest it had been in many years. I had the second transplant in early October 2012. The treatments seemed to be less intense, my recovery more rapid and the response was complete remission at 100 days. Thanks to the generous support of our Dean Marsha Pyle, I was able to maintain my employment and insurance through December. Retirement is wonderful!! I have been able to retain the opportunity of working in the Office of Student Programs with a group of students from Kuwait one day each week when I am in Kansas City.

Uncle Sam character who will march in the 2016 Fasnet parade In Stuttgart Germany. 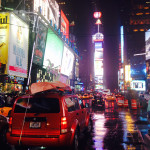 The kayak on the top of my car in the rain in Times Square NYC. 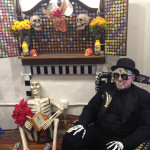 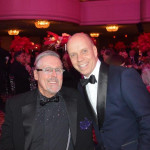 John and Scott Hamilton at the Hamilton Cares Gala in Cleveland 2015. 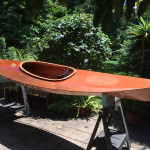 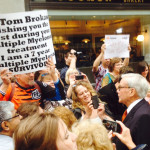 Meeting Tom Brokaw at the Today Show in NYC. 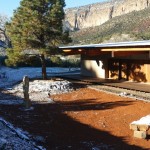 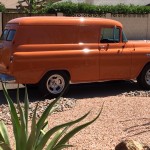